home about Peg what the critics say portfoliogallery contactpeg's blog 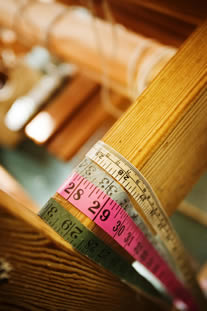 Damask weaving is a precise art 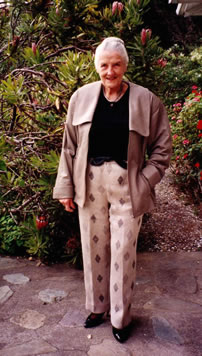 Peg wearing her own designs

"When Peg Moorhouse stepped on the catwalk at the tenth Wearable Art Awards in Nelson this past September, little did she realise what a stir she would create.

'I felt I was like a Man of the Match but without the cheque'. The attention may have been due partly to Peg's ten year's of participation, both as a contestant and model in this annual, exciting, visual extravaganza, and partly to her age. At 81, Peg's vitality and attitude to life belie her years."


"Superb use of colour. This garment could be worn anywhere with style and aplomb. Technically very well executed with a sense of fun in the few ends left on the surface."

"...Limbs Dance Company ...opened the [Auckland Festival] with a dance piece, one of the male dancers [was] wearing Tribal Cloak entered in the [National Woolcrafts] fashion section."

1970s
"Stephanie Strawbridge modelled this hand-woven and made wool lurex evening coat trimmed with marabou feathers. The handiwork of Zonta member Mrs Peg Moorhouse, it was the highlight of the show."

What the critics say

"Like a magpie to silver, fibre artist Peg Moorhouse's eye is drawn to colour....subtly textured Japanese paper [is] the latest inspiration in her thirty-five years of weaving and have prompted a series of striking abstract artworks..."


"Peg Moorhouse's energy is infectious. Sitting in the Millennium Art Gallery with her woven works surrounding her, she wriggles and fidgets in her seat. She's a real live wire."

"Another, to me, outstanding work is that of Peg Moorhouse of the Marlborough Sounds. Her three Damask Linen Hangings ...are lovely works with colour blends in black and red."

1990s
"Not only was Mrs Moorhouse's entry 'Cape' highly commended in the wool section of the competition, but one of the judges was so taken with one of her entries that he bought it from her on the night".

home about Peg what the critics say portfolio gallery contact